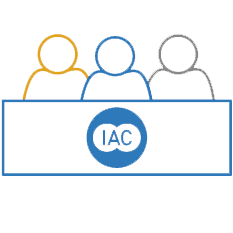 The proposed slate was voted upon by the IAC membership during the annual general meeting on 1. September 2022.

The new Board of Directors to be installed during the 21st International Congress in Baltimore, USA. 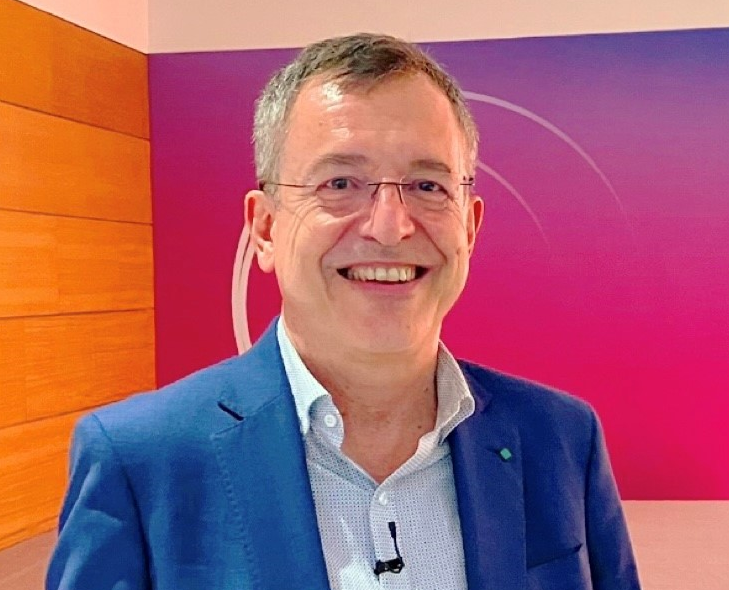 Professor Fernando Schmitt is a Professor of Pathology at the Medical Faculty of University of Porto, Senior Researcher and Head of Molecular Pathology Unit at IPATIMUP, Director of RISE (Clinical and Translational Research Network of the Medical Faculty), Past-President of the International Society of Breast Pathology and President of the International Academy of Cytology (IAC). He has authored over 500 papers in peer-reviewed journals, 33 book chapters, and is the editor of six books. Prof Schmitt is widely considered a world-leading expert in cytopathology and breast cancer. Fernando was a fellow at the Karolinska Medical Hospital, Stockholm, and was a Professor of Pathology at the University of São Paulo (USP), Brazil, and University of Toronto, Canada. He was also Director of the Department of Medicine at Laboratoire national de Santé, Luxembourg. His research work is on breast cancer, with emphasis on molecular markers, cell adhesion and invasion, therapeutic targets, and mechanisms of resistance. In the last years, his research work has been dedicated to the study of molecular markers on cytological material. Fernando serves as Editor in Chief of Pathobiology and Associate Editor of six major scientific journals and sits on the editorial board of many others. He is a standing member of the WHO-IAC Classification of Tumours. He has also been chair, president, or scientific director of several major European, Portuguese, and Brazilian scientific societies of pathology and cytology. He received the following prizes: Educator of the Year 2011 by the PSC, GOLDBLATT AWARD 2013 by the IAC, Dario Cruz 2018 from the Portuguese League Against Cancer for his career as a researcher in breast cancer, and the 2021 International Achievement Award from the American Society of Cytopathology. 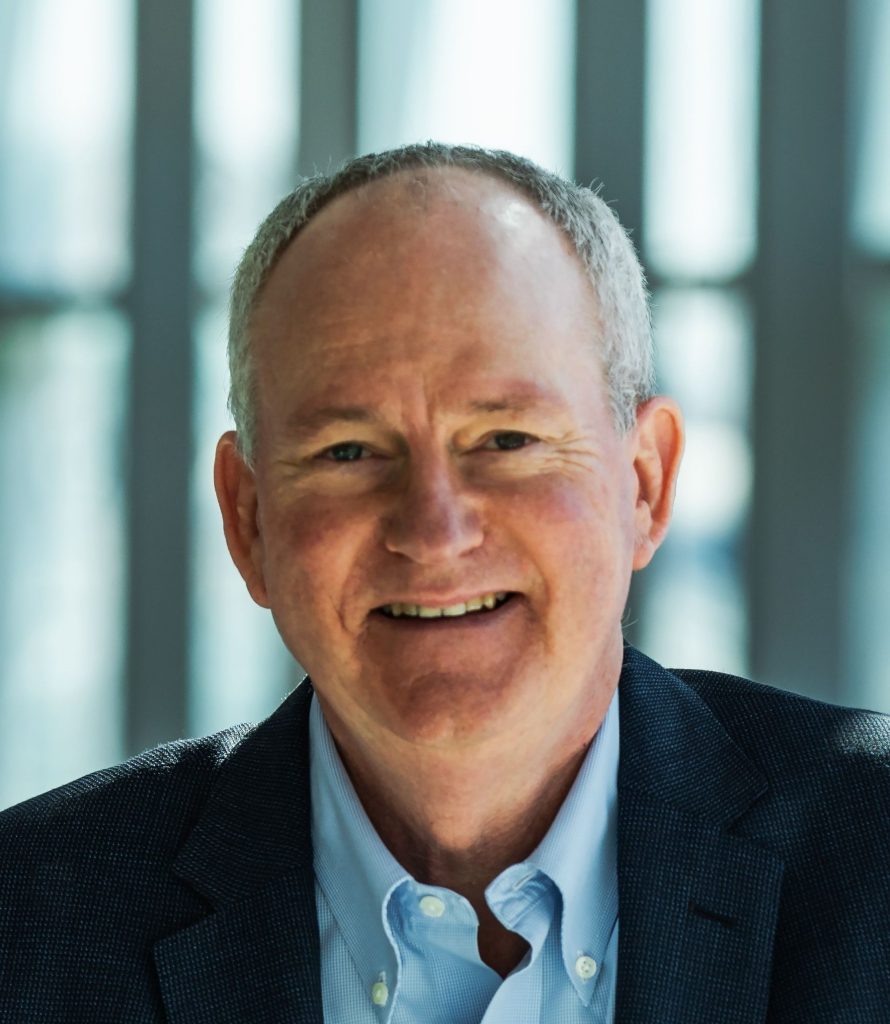 Professor Andrew Field received his medical degree from the University of New South Wales in 1978. He completed his anatomical pathology training in 1985 and gained the FIAC in 1990. He obtained the Royal College of Pathologists of Australasia Diploma of Cytopathology in 1996.

He is a dedicated teacher of cytopathology in his Department, at national meetings and at IAC Tutorials and tutorials in low and middle income countries.

He has been a Council member and president of the Australian Society of Cytology, a Board member of the Papanicolaou Society of Cytopathology for several periods since 2006 and a foundation member of the African Strategies for Advancing Pathology organization, which advocates for and co-ordinates improvements in pathology services in Africa.

He has had a long interest in the establishment of international standardized reporting systems in FNAB cytopathology to assist patient care and research, and was a contributing author to the Papanicolaou Society System for Reporting Pancreaticobiliary Cytology and the ‘Milan’ system for Salivary Glands, and co-editor and lead author of the IAC Yokohama System for Reporting Breast Cytopathology.

He has authored or co-authored more than 73 articles and published three textbooks and eighteen book chapters, including in 2014, Lymph Node and Spleen Cytohistology, co-authored with Dr William Geddie from Toronto, then Practical Cytopathology: A Diagnostic Approach to Fine Needle Aspiration Biopsy, co- written and edited with Dr Matthew Zarka, Mayo Clinic, Scottsdale in 2017, and in 2020, The IAC Yokohama System for Reporting Breast FNAB Cytopathology, co-edited with Wendy Raymond and Fernando Schmitt.

He has received a number of national and international awards including the IAC Goldblatt Award of 2022.

Known globally as an innovative educator, Dr. Ali has well over 360 invited lectures, keynote speeches and visiting professorships all over the world. In collaboration with international societies and universities, he directs or co-directs several annual major cytopathology tutorials.

Dr. Ali has published extensively with over 310 articles in major scientific journals, over 35 books, book chapters and electronic media. Known for his expertise in “Thyroid” and “Pancreatic” cytopathology, his monograph on “The Bethesda System for Reporting Thyroid Cytopathology” has been translated in 8 languages and is extensively used in medical practice all over the world. He is the founding editor-in-chief of the Journal of the American Society of Cytopathology (JASC) and has served as member of the executive board and chair of the scientific program and several other committees of the American Society of Cytopathology (ASC). He is a past-President of the ASC, President-elect of the International Academy of Cytology (IAC) and chair of the International Board of Cytopathology of the IAC. He is a fellow of both, the Royal College of Pathologists (UK) and the IAC. He is recipient of the ASC’s “Warren R. Lang Award” in 1996, “President’s Award” in 2012, “Excellence in Education Award” in 2015 and the IAC’s “Maurice Goldblatt Award” in 2019. 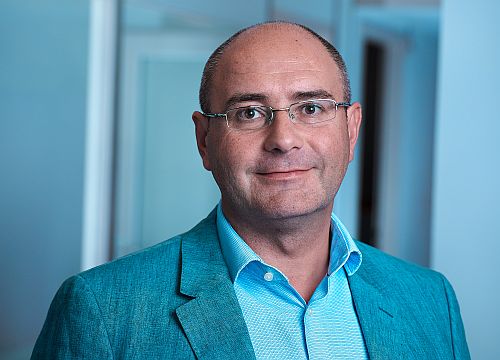 Dr. Bongiovanni is head of Cytopathology at SYNLAB Pathology in Lausanne, Switzerland.

He is the author of more than 160 scientific articles and 15 book chapters. He is currently vice-president of the Swiss Society of Cytology and head of the scientific committee of the European Federation of Cytology Societies (EFCS). 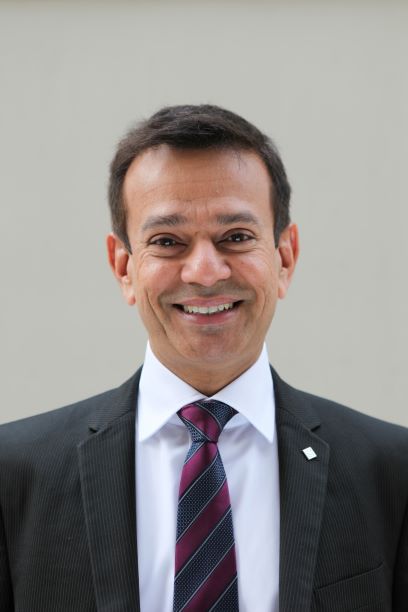 He has an interest in FNA, ROSE and in developing reporting terminologies including the UK RCPath terminology for thyroid cytology, and a contributor to the Paris, Milan and WHO/IARC lung cytopathology reporting systems. He is a co-editor of The International System for reporting serous fluid cytopathology 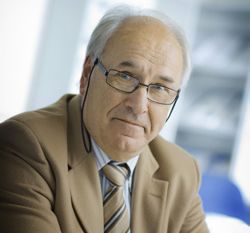 Dr. Syrjänen graduated in Medicine, University of Helsinki, in 1974, where he received his Ph.D. in pathology (1975). Board-certified pathologist (1980), and FIAC (1993). He was Professor and Chairman, Department of Pathology, University of Kuopio & Head of the Department of Clinical Pathology, Kuopio University Hospital in 1989-1999, and Director of Cytopathology Laboratory, Finnish Cancer Society (Kuopio) for 16 years (1981-1996).

Dr. Syrjänen served as President of the Finnish Society of Clinical Cytology (FSCC)(1989-1998) and organized the 19th European Congress of Cytology in Turku (1991), being President of the European Federation of Cytology Societies (EFCS)(1990-1991). Dr. Syrjänen is the founding member of the Board, International Papillomavirus Society (IPVS)(1995-2016) and EUROGIN (1992-). He is Honorary Member of the American- (ASCCP), Italian- (ISCCP) and Hungarian (HSCCP) Society of Colposcopy and Cervical Pathology as well as Honorary Member of the Finnish Society of Clinical Cytology. Dr. Syrjänen was the recipient of Maurice Goldblatt Cytology Award in 2010. Apart from Acta Cytologica, he is an Editorial Board member in 17 other journals and Associate Editor-in-Chief (CME Journal of Gynecologic Oncology). Dr. Syrjänen has authored/edited 9 international books, written over 50 book chapters, and published over 900 original papers and reviews in peer-reviewed journals. 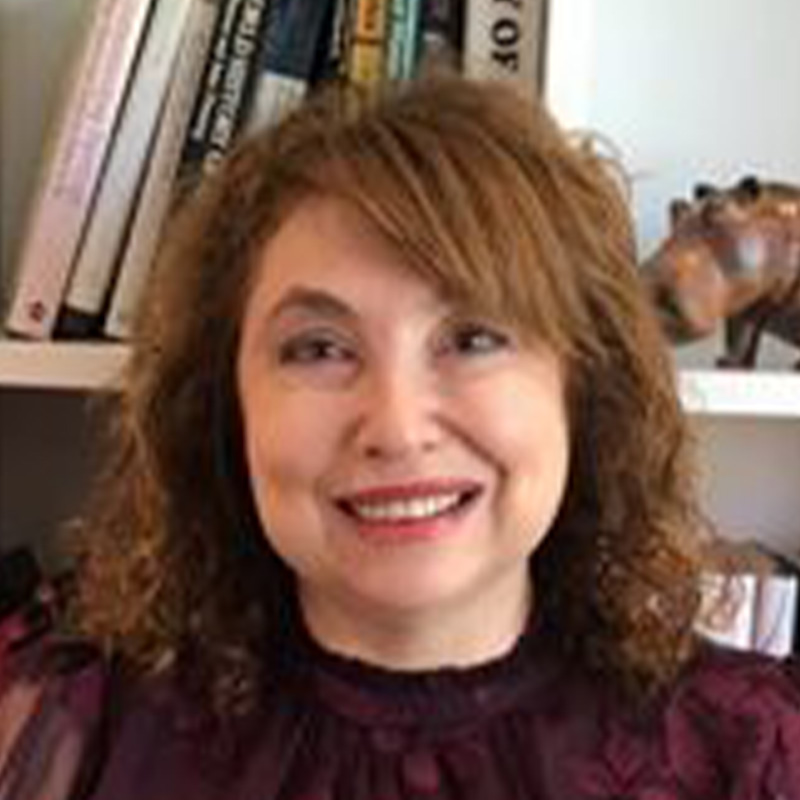 Dr Michelow has published over 70 journal articles and book chapters, is an editorial board member for several cytopathology journals, has organised symposia and workshops, and is frequently invited to speak at both national and international pathology congresses. She has continuing interests in visual literacy, the roles of exfoliative and aspiration biopsy cytology in under-resourced communities and in quality standards in cytopathology. 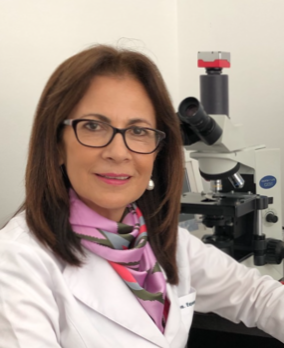 Dr. Esperanza Teuzaba Torres graduated in Medicine in 1982, later as a pathologist in 1986 at the Universidad del Rosario, San Jose Hospital, Bogotá Colombia.

She trained in Cytopathology at the Jackson Memorial Hospital, University of Miami. Miami and is currently professor at the School of Medicine and Health Sciences, Universidad del Rosario, and the University Foundation of Health Science. Bogota.

She is the scientific director of Patolab laboratory, Clínica de la Mujer, Bogotá, where practices and training for cytology students take place.

Currently working in the Cervical Cancer Agreement Group, developing guidelines, outlines, and efforts to reduce the incidence and mortality of cervical cancer in Colombia.

For the last 10 years Esperanza has worked actively in the organization of Scientific Meetings, Cytopathology Congresses and an IAC Tutorial in Bogotá, Colombia.

She also collaborates, as a member of SLAC, with the development and improvement of Cytology in Latin America, with continuing education. 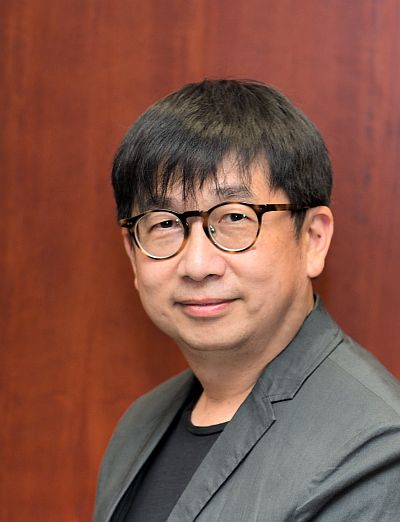 Dr Tse is a professor in the Department of Anatomical and Cellular Pathology, Prince of Wales Hospital and the Chinese University of Hong Kong. He is the vice president for Asia for IAP, and the president of the Hong Kong Division of International Academy of Pathology. He is currently the Regional Editor for Australasia for Histopathology, section editor for Diagnostic Pathology, associate editor for Pathology, editorial advisory board member for Cancer Cytopathology, overseas editor for Journal of the American Society of Cytopathology, outreach editor for Cytopathology, and editorial board member for other journals including Acta Cytologica, Chinese Pathology Journal, Modern Pathology and Seminars in Diagnostic Pathology. Dr. Tse has given many invited presentations, convened regional and international meetings and has published actively in breast pathology, and has published extensively. 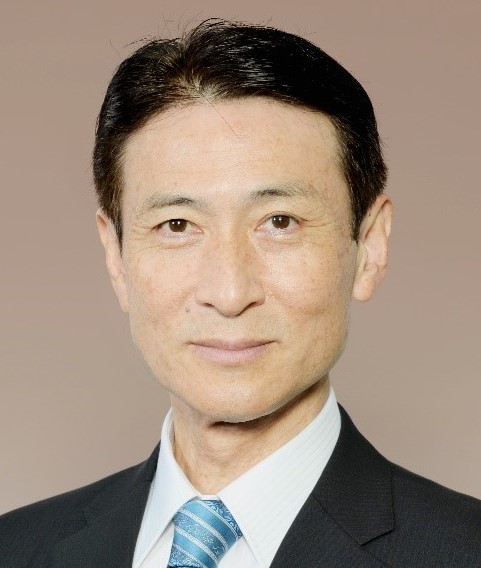 Dr. Yukitoshi Satoh, MD, PhD, FIAC is the Professor and Chairman of Thoracic Surgery at the Kitasato University School of Medicine and the Director of the Kitasato University Medical Center Hospital, Japan. Currently, he serves as the President of the Japanese Society of Clinical Cytology (JSCC), the largest national society of cytology worldwide with over 12,000 members. Previously, in 2020, he served as the Congress President of the JSCC.

His research interests include clinical and basic research in thoracic oncology and cytology, particularly in the diagnosis of thoracic malignancies and genomic analyses of lung adenocarcinomas.

He is also interested in cytomorphologic diagnosis of lung cancers and development of reporting terminologies for respiratory cytology and has contributed to the World Health Organization Reporting System for Lung Cytopathology. He has authored and co-authored over 200 peer reviewed scientific articles regarding thoracic oncology including cytology.

Moreover, he seeks to promote the globalization of respirator cytology and academic improvement of IAC. 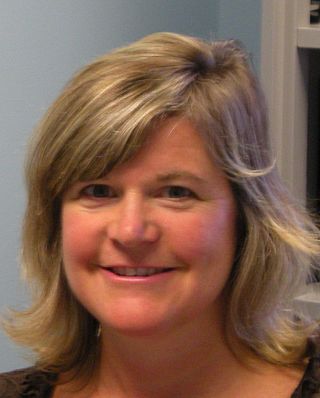 Donna is an active member of numerous cytology organizations. Her special interests are in gynecologic, cell block preparation, ROSE and telecytology. She has published book chapters and many manuscripts in all areas of cytology. Donna has played an active role in teaching within the IAC, ECC, ASC, ASCP, ASCT and CAP. She has presenting numerous workshops, panel luncheons, and teleconferences in diagnostic cytopathology and related topics.